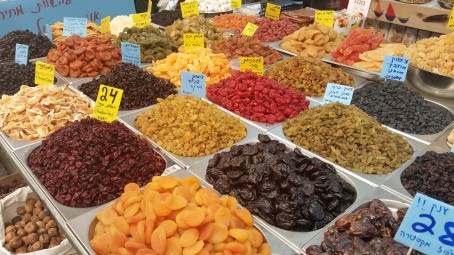 Rebbe   El on Travel and Israel

This week we begin a new book of the Torah, the book of Leviticus,  Safer Vayikra.  This Shabbat is called Shabbat HaChodesh, which is one of the special Shabbatot before Passover, which is either the Shabbat before Rosh Chodesh Nisan, or as it is this year, the actual day of Rosh Chodesh Nisan, the day we begin the new month of Nissan.  If we begin Nisan this Shabbat, that means that Passover is just two weeks away, which is very exciting! So get all your spring cleaning done now! Many people dread both the beginning of the month of Nisan, and also reading the book of Leviticus. Personally I love both. Passover is my favorite holiday of the year – with so many childhood memories of Passover seders at my parents’ house.  Many people do not like Passover, because of all the cleaning, and matzah may not be everyone’s favorite cuisine – but there are many new ways to spice up matzah, to not taste so bad. (And if you are lucky enough to be in Israel, and some parts of New York and other places in the United States, there are Kosher for Passover restaurants. You still have two weeks to book your flight to Israel!)

But why do people sometimes not find the Torah readings in the book of Leviticus, Vayikra their top favorites?  The book of Vayikra is known as Torat Kohanim, the book, or instructions, of the Priests, because it includes the laws of the sacrifices, called in Hebrew, karbanot.  Some people do not like reading the portions in the Torah about the sacrifices, because it is not relevant today. The Beit HaMikdash, the Holy Temple in Jerusalem was destroyed, and so we have no place to offer sacrifices. Therefore, why read about the sacrifices that used to be brought, that clearly can no longer be brought today? In addition, there are many amongst us who are vegetarians, and do not want to hear about animals being killed, and sacrificed.

There were sacrifices for when someone made an error and wanted forgiveness.  There were sacrifices for times of gratitude times, when people wanted to praise God, and times when people wanted to ask for forgiveness.  Once the Holy Temple in Jerusalem, the Beit HaMikdash was destroyed, sacrifices could no longer be offered, and so the rabbis had to find ways to offer gratitude, praise and thanksgiving. Therefore, prayer was created, instead of sacrifice. We now have additional prayers, the Musaf prayers, when sacrifices used to be offered.  Reading the Torah portions in the book of Leviticus which discuss the sacrifices, remind us that today when we no longer have the Holy Temple in Jerusalem, we now have developed alternative ways to show our devotion to God, and methods to express our gratitude, and praise to God for the wonders and blessings in our lives.

During my rabbinic training, we spent a year studying in Israel. One of the highlights of that year, was Shabbat, when we would spend time at each others homes, all across Jerusalem, experiencing different prayer services, and walking the streets of Jerusalem, walking off the many calories consumed during our Shabbat meals.  We would often remark how the streets of Jerusalem would smell very differently, if there was still the Beit HaMikdash, if the Holy Temple still existed, and sacrifices were still being brought. Wow! Would the city smell of burnt meat! How different it would be! Honestly, it would smell horrible! I very much appreciated the sounds of prayer coming out of the windows of the different synagogues, as we often verbally imagined what the street aroma would be if the sacrificial altars still existed. We especially had these thoughts, when we walked through the empty streets of Machane Yehuda, when the gates were pulled shut on a Shabbat afternoon, desolate, and empty – a stark difference than the scene just the day before, when everyone was running to get their fresh challah, and pita, hummas, and Marzipan rugalach, and fresh fruits and vegetables.  When I walked through the empty streets of Machane Yehuda in 1995, the gates when pulled down, were empty, not the artistic museum they have now become. And so this year, when I read about the sacrifices, I will think about Jerusalem in 2018, how the streets do not have the smell of sacrifices on the altars in the Holy Temple, but rather I will think about the beauty of the smells that emanate from the spices that are sold in the marketplace of Machane Yehuda, and the serenity of that same location, when the gates are drawn closed at night, and each Shabbat. Shabbat Shalom and a Gutten Chodesh to all ! 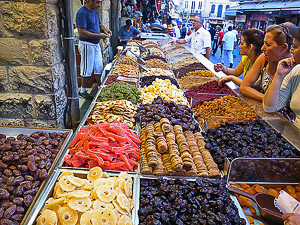