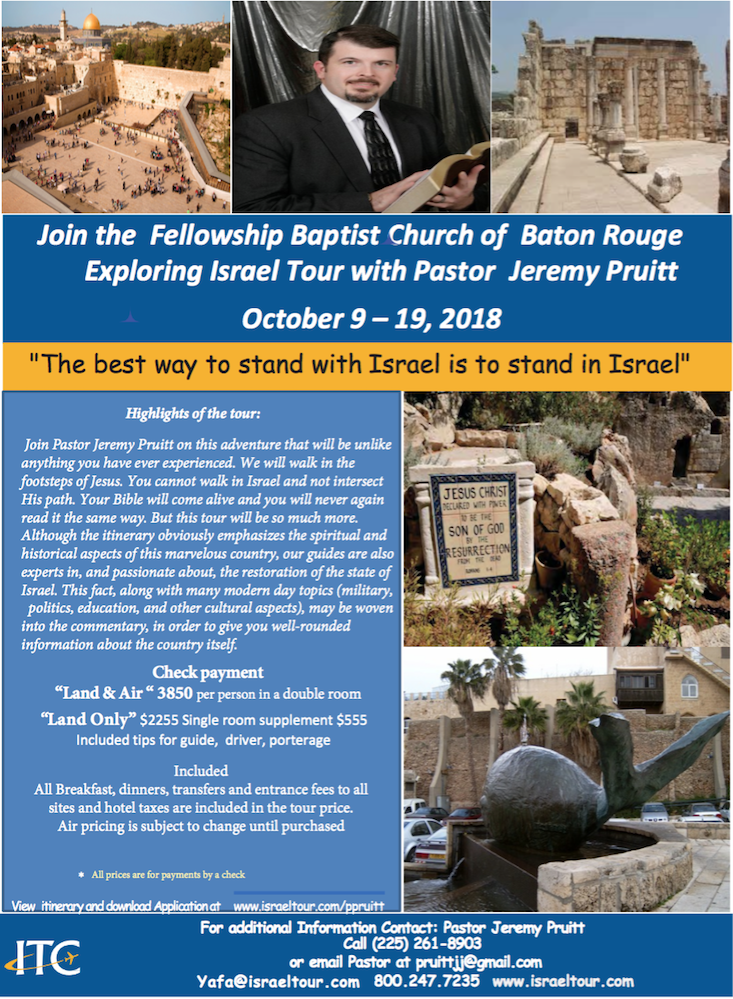 Included
All Breakfast, dinners, transfers and entrance fees to all sites and hotel taxes are included in the tour price. Air pricing is subject to change until purchased

WEDNESDAY, OCTOBER 10 – ARRIVE IN ISRAEL
Upon arrival in Israel, we will be met and assisted by our ITC representative and one of the best English-speaking guides in Israel and begin our exploration of the land of promise. Our first stop will be the ancient city of Joppa, where Peter’s vision began allowing Gentiles to worship the Messiah of Israel. We will then arrive at our lovely hotel right off the shore of the Mediterranean Sea. Where you can walk along the beach or just relax before dinner. Overnight: Grand Beach Hotel in Tel Aviv

THURSDAY, OCTOBER 11 – FROM COASTAL PLAIN TO GALILEE
This morning it’s up the coast road to Caesarea, the place from which Peter, the Apostle to the Jewish people was called to go to the Gentiles. At Megiddo, we will overlook the plains where the final battle on earth will take place. And we will stand atop Mount Carmel where Elijah defeated the prophets of Ba’al. Then a short drive will take us through Cana of Galilee, the site of Jesus’ first miracle on our way to Nazareth where we will visit Nazareth Village, the recreated boyhood home of the Messiah. The Mount of Precipice is where the folks of his hometown wanted to throw Him off, but His time was not yet. Then, we will arrive at the Sea of Galilee, our home for the next couple of days. Overnight: Nof Ginosar Hotel, Sea of Galilee

FRIDAY, OCTOBER 12 – SOURCES OF THE JORDAN AND THE GOLAN HEIGHTS
Then we travel north to one of the headwaters of the Jordan River at Tel Dan, one of the first places inhabited by the twelve tribes and stand in front of a gate

that Abraham October have visited. Nearby at Caesarea Philippi we will visit the place of the turning point of Jesus’s ministry; the place He challenged Peter with the question of all questions, “Who do you say I am?” From there we will ascend the strategic Golan Heights to Mt. Bental, a military outpost that overlooks four nations. Overnight: Nof Ginosar Hotel, Sea of Galilee

SATURDAY, OCTOBER 13 – SEA OF GALILEE
This morning we will begin at the ancient city of Capernaum where Jesus began his Ministry in the Galilee. There we will see where he told fishermen that he would make them into “fishers of men” and visit in the synagogue where the Master taught. Then we will pray at the Mount of Beatitudes, where Jesus delivered the Sermon on the Mount. We will visit the “lonely place”, where He performed the second Multiplication of Fish and Loaves as he reappeared to his followers on the shores of the Sea of Galilee. Next we will see the famous “Jesus Boat”, the preserved wreck of a 2,000 year old fishing Galilean fishing boat. From there, we will take a wooden ship across the Sea that the Master calmed with His word. After a lunch of Saint Peter’s Fish, you will enjoy one of the highlights of your life as you renew your vows to G-d as you are immersed in the Jordan River at Yardeneit. In Tiberias we will experience the Galilee like nowhere else possible, at The Galilee Experience, and its multi-media presentation of the area and of its most famous Galilean, Jesus. Overnight: Nof Ginosar Hotel, Sea of Galilee

SUNDAY, OCTOBER 14 – JORDAN VALLEY
Today we drive south through the Jordan River Valley. We visit the ancient Roman city of Beit She’an. Then, we continue through along the Valley with the mountains of Gilead to our east over the border in the Kingdom of Jordan while Mt. Gilboa and then Samaria lies to our west. Near Jericho we will stop at Qasr El Yahud, a Baptismal site to some, which is also identified with the ford where the Children of Israel, led by Joshua, crossed the Jordan River to enter The Land and where the prophet Elijah ascended to Heaven in a Chariot of Fire. Just north of the Dead Sea we will turn west and cross the Judean Desert to drive up to the most beautiful city in the world, Jerusalem, where we will first stop to overlook a sweeping view of Jerusalem before checking into our hotel. Overnight: Grand Court Hotel, Jerusalem

MONDAY, OCTOBER 15 – JERUSALEM
We will stand this morning on the Mount of Olives before we pray at the Garden of Gethsemane and worship in the Church of the Agony. The City of David is the most fascinating archaeological discovery in Jerusalem and one that will mark your heart with history and with passion. Then we will see (without getting wet, as in the warmer months) Hezekiah’s Tunnel, a 2,700 year old water system that saved the Judean capital of Jerusalem from an Assyrian onslaught in the 8th century B.C.E. From there, we will walk up the stairs of ascent from the pool of Siloam towards the very Temple Mount. We will lunch at famous Kibbutz Ramat Rachel in Jerusalem from which we will overlook the Shepherd’s Fields of Bethlehem. Overnight: Grand Court Hotel, Jerusalem

TUESDAY, OCTOBER 16 – JERUSALEM
Today, we will take our walking tour of the old city. We will visit the place remembered as the “Upper Room” and the Tomb of King David. At the Temple Institute we will see the preparations being made for the rebuilding of the Holy Temple. Our visit of the renewed Jewish Quarter will include a stop with two men who will close their shop (Shorashim) just to answer your questions about what Jewish people believe and why they don’t believe as we do. Just around the corner from this shop, we will see the ruins of Hezekiah’s Broad Wall, which complements the story of saving Jerusalem from Senacherib’s armies in the 8th century BCE. We will explore the colorful bazaars that lead to the Temple area and we will pray at the Western Wall with people from around the world. We will stand on the Southern Steps that Jesus walked to enter the Temple and will see where 3000 were baptized in one day. Depending upon the scheduling, sometime today, we will walk through the ancient Western Wall Tunnels that will take us along the Western Wall to its very end. Overnight: Grand Court Hotel, Jerusalem

WEDENSDAY, OCTOBER 17 – JUDEAN DESERT AND DEAD SEA
This morning, we will drive into the Judean desert where we will consider how Israel survived forty years in this wilderness. We see where the Dead Sea Scrolls were found at Qumran and discover that much more has been found there in recent years. Ein Gedi will give us a look at some of the beauty of this wilderness where David hid from Saul. A cable car will take us to the top of Masada to save us a very steep climb to the fortress. There we will walk among Herod’s palaces, storehouses and bathhouse and the Jewish synagogue which witnessed the Jewish resistance to the Romans approximately 2000 years ago. Then, we will drive to the lowest point on the earth where you will enjoy playing in the mud like you haven’t since you were a child and then, you can wash it off as you float in the Dead Sea. Overnight: Grand Court Hotel, Jerusalem

THURSDAY, OCTOBER 18 – JERUSALEM
It is our last day in the land and it will be bittersweet, indeed. We will begin at Yad Vashem, a Holocaust Memorial which will stir you like nowhere on earth. The Israel Museum is home of the most amazing model of ancient Jerusalem and of the Shrine of the Book, the resting place of the Dead Sea Scrolls. We will have some time for shopping at the Ben Yehuda Street open-air mall. So it will be our last place to visit before we share communion at the Garden Tomb before we leave Jerusalem. We will stop along the way for our last supper together in the land. After dinner we will go to the airport so that we October return home on our midnight flight back to America.