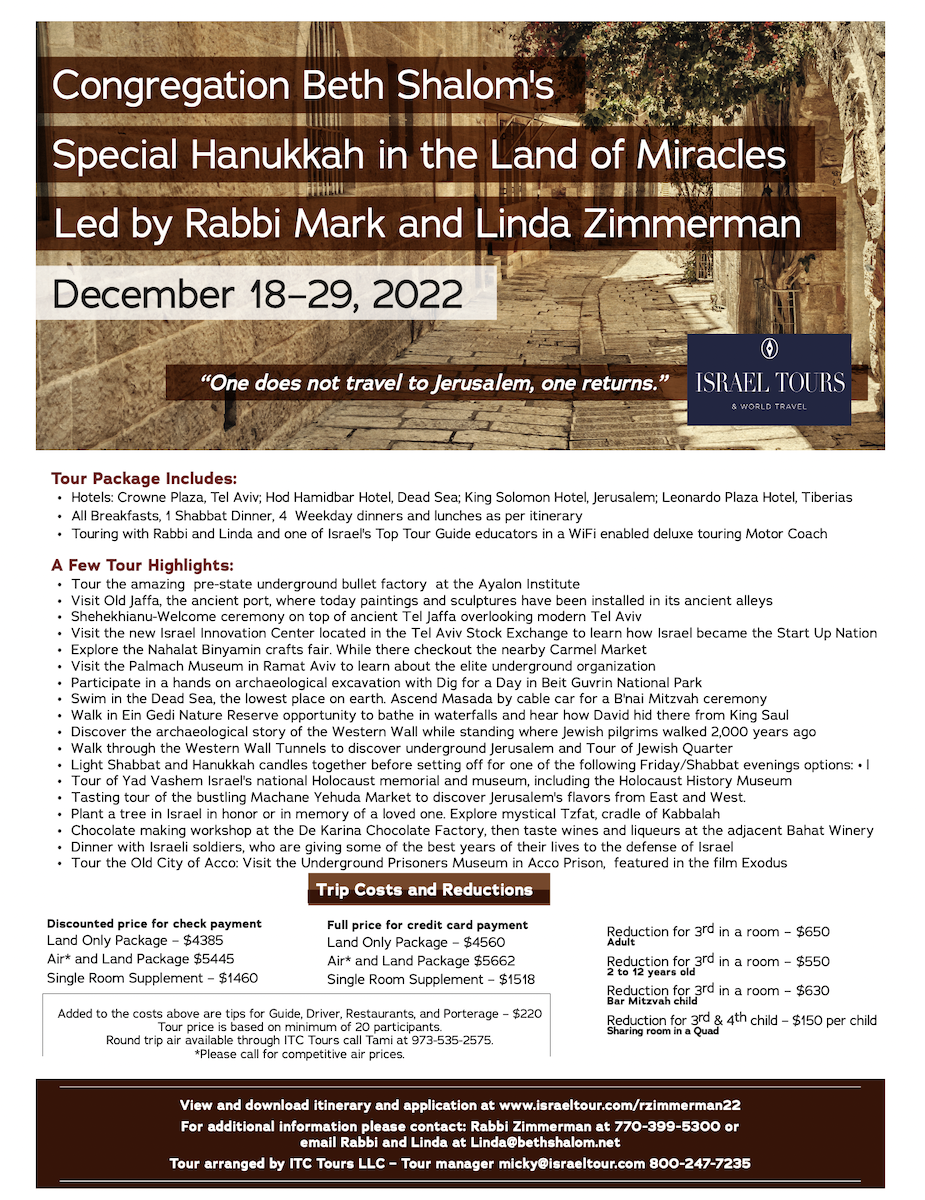 Special Hanukkah in the Land of Miracles

Monday, December 19 – Going Up into the Land

Walking tour of historic “Little Tel Aviv” Discover the quaint Neve Tzeddek neighborhood that gave birth to the “first Hebrew city in 2,000 years”, once home to Zionist cultural pioneers Eliezer Ben Yehuda, S.Y. Agnon and Nachum Gutman. • ITC Touch: Discover City of Sand and Sea, a mosaic fountain created by artist and writer Nachum Gutman portraying scenes from the history of Jaffa and Tel Aviv. • Hear about the establishment of Tel Aviv at the Founders’ Monument then stroll down Rothschild Boulevard to see the Bauhaus architecture for which central Tel Aviv’s “White City” was declared a UNESCO World Heritage Site. • Lunch on your own and free time to explore the Nahalat Binyamin crafts fair. While there checkout the nearby Carmel Market (great street food) and bohemian Sheinkin Street. All three of these Tel Aviv icons meet at the “Magen David” junction. • Visit the Palmach Museum in Ramat Aviv to learn about the elite underground organization which played a critical role in the founding of the State of Israel. • Light Hanukkah candles at hotel together before setting out for a free evening. • Free evening. Dinner on own. • Overnight: Crowne Plaza Hotel, Tel Aviv

Wednesday, December 21 – Digging Up the Past and the Amazing Dead Sea

Set out early to travel to the Judean Lowlands • Dig up Israel’s past by participating in a hands on archaeological excavation with Dig for a Day in Beit Guvrin National Park • Lunch on own • Travel to the Dead Sea region. • Check-in to Hod Hamidbar Hotel at the Dead Sea. • Swim in the Dead Sea, the lowest place on earth. The hotel also has a fresh water pool. • Light Hanukkah candles together at hotel. • Dinner at hotel • Overnight: Hod Hamidbar Hotel, Dead Sea

Discover the archaeological story of the Western Wall and episodes from rabbinic texts while standing where Jewish pilgrims walked 2,000 years ago at Robinson’s Arch and the Southern Wall Excavations. • Visit the traditional prayer area of the Western Wall. • Walk through the Western Wall Tunnels to discover underground Jerusalem. • Lunch on own in the Jewish Quarter • Tour of Jewish Quarter including the Herodian Mansions, Broad Wall, Rooftops and Cardo followed by free time to shop and explore on own. • Free time to relax and get ready for Shabbat. Friday/Shabbat evenings options: • Light Shabbat and Hanukkah candles together before setting off for one of the following Friday/Shabbat evenings options: • Join hundreds of other Jews from around the world to Greet the Sabbath at the Western Wall. Option to pray together as a congregation at the “Masorati Kotel”, where men and women can stand together.

Shabbat/Saturday, December 24 And on the Seventh Day…in Jerusalem

Tour of Yad Vashem – Israel’s national Holocaust memorial and museum, including the Holocaust History Museum and Children’s Memorial. (Children under age 10 are not permitted in Yad Vashem’s historical museum). • Alternate program for younger children: Visit Jerusalem’s Biblical Zoo, where you’ll see animals which lived in Israel during biblical times. (Children must be accompanied by an adult. Zoo visit not included in the tour price). • Lunch on own • Multimedia tour of the Herzl Museum to discover the story of Zionism’s founding father, followed by a meaningful visit to Mt. Herzl Cemetery to discover chapters in the history of Israel while visiting the graves of Yitzhak Rabin, Golda Meir, Theodore Herzl and Hannah Senesch. • Tasting tour of the bustling Machane Yehuda Market to discover Jerusalem’s flavors from East and West. • Light Hanukkah candles at hotel together before setting out for a free evening. • Free evening. Dinner on own, if still hungry. • Overnight: King Solomon Hotel, Jerusalem

Check out of King Solomon Hotel. • Option: Early Bar Mitzvah ceremony at the egalitarian Masorti Kotel near Robinson’s Arch. • Travel to northern Israel through Jordan Valley. ponder why its 1,500 year old mosaic floor features a wheel of the Zodiac. • Lunch on own in modern town of Beit Shean. • Tour the stunning, extensive Roman ruins of Beit Shean, once a splendid city of the Decapolis and formerly an important city in biblical Israel. • Check in to the Leonardo Plaza Hotel in Tiberias. • Dinner on own • Overnight: Leonardo Plaza Hotel, Tiberias

Plant a tree in Israel in honor or in memory of a loved one. • Explore mystical Tzfat, cradle of Kabbalah (Jewish mysticism) in the 16th century. Tour its old synagogues and picturesque alleyways. Then discover the origins of our Friday night service in the city where Lecha Dodi was written. • Lunch on own. • Jeep tour in the Golan Heights for a special perspective on Israel’s complex geopolitics as we “look down at Israel” the way the Syrian army once did. Then look out at the border from strategic Mt. Bental. • Chocolate making workshop at the De Karina Chocolate Factory. • Then taste wines and liqueurs at the adjacent Bahat Winery. • Dinner with young Israeli soldiers, who are giving some of the best years of their lives to the defense of Israel – Meet the human face of the Israeli army. • Overnight: Leonardo Plaza Hotel, Tiberias

Wednesday, December 28 – Along the Mediterranean Coast

Travel to Rosh Hanikra in the northwest corner of Israel. • Descend by cable car to explore the Grottos of Rosh Hanikra – Beautiful sea caves formed by the forces of wind and water. • Tour the Old City of Acco: Visit the Underground Prisoners Museum in Acco Prison, where the British held and even executed Jewish underground fighters. A daring escape from this prison is featured in the film Exodus. Then venture beneath the streets of Old Acco to explore the Crusader Knights Halls and emerge in the marketplaces of this charming Mediterranean city. • Lunch on own • Look out from the top of the Bahai Gardens on Mt. Carmel in Haifa. • Check-in to the Crowne Plaza Hotel on Tel Aviv’s Mediterranean Coast. • Free evening. Dinner on own. Overnight: TBA Hotel, Tel Aviv.

Check out of hotel and pack bus. • Climb down into the Ayalon Institute in Rehovot, amazing underground, pre-State bullet factory built by the Haganah under the noses of the British. • Tour Old Jaffa, the ancient port city once known as Zion Gate through which Jonah tried to flee and where Solomon brought the Cedars of Lebanon on the way to Jerusalem. Today paintings and sculptures have been installed in its ancient alleys. • Lunch on own • Afternoon free to explore on own and get in last minute shopping. • Farewell dinner at Malka, a gourmet restaurant which trains at risk youth for culinary careers. • Transfer to Ben Gurion Airport • Overnight at TBA Hotel for those on Eilat-Petra extension.

Begin planning next Israel trip with Rabbi Mark and Linda Zimmerman and ITC Tours. • See the ancient synagogue of Beit Alfa and

Reduction 3rd Bar or Bat Mitzvah child in a room -$630

Tips will be added and pre collected for Guide, Driver, restaurants and porterage @ $220 per person

Special Hanukkah in the Land of Miracles

Monday, 19 December – Going Up into the Land

Wednesday, 21 December – Digging Up the Past and the Amazing Dead Sea

Shabbat/Saturday, 24 December – And on the Seventh Day…in Jerusalem

Wednesday, 28 December – Along the Mediterranean Coast

PRICES FOR THE ABOVE TOUR

Flights.  Actual prices depend on when booked and contract received from the airline; fuel surcharges are subject to fluctuation; Israel Tours can only hold group space up until 90 days before departure, after which air prices are subject to change; tour companies have only very limited control over group seating on flights.)

Reduction 3rd Bar or Bat Mitzvah child in a room -$630

Tips will be added and pre collected for Guide, Driver, restaurants and porterage @ $220 per person