We are Joining Congregation Shaarei Shalom’s 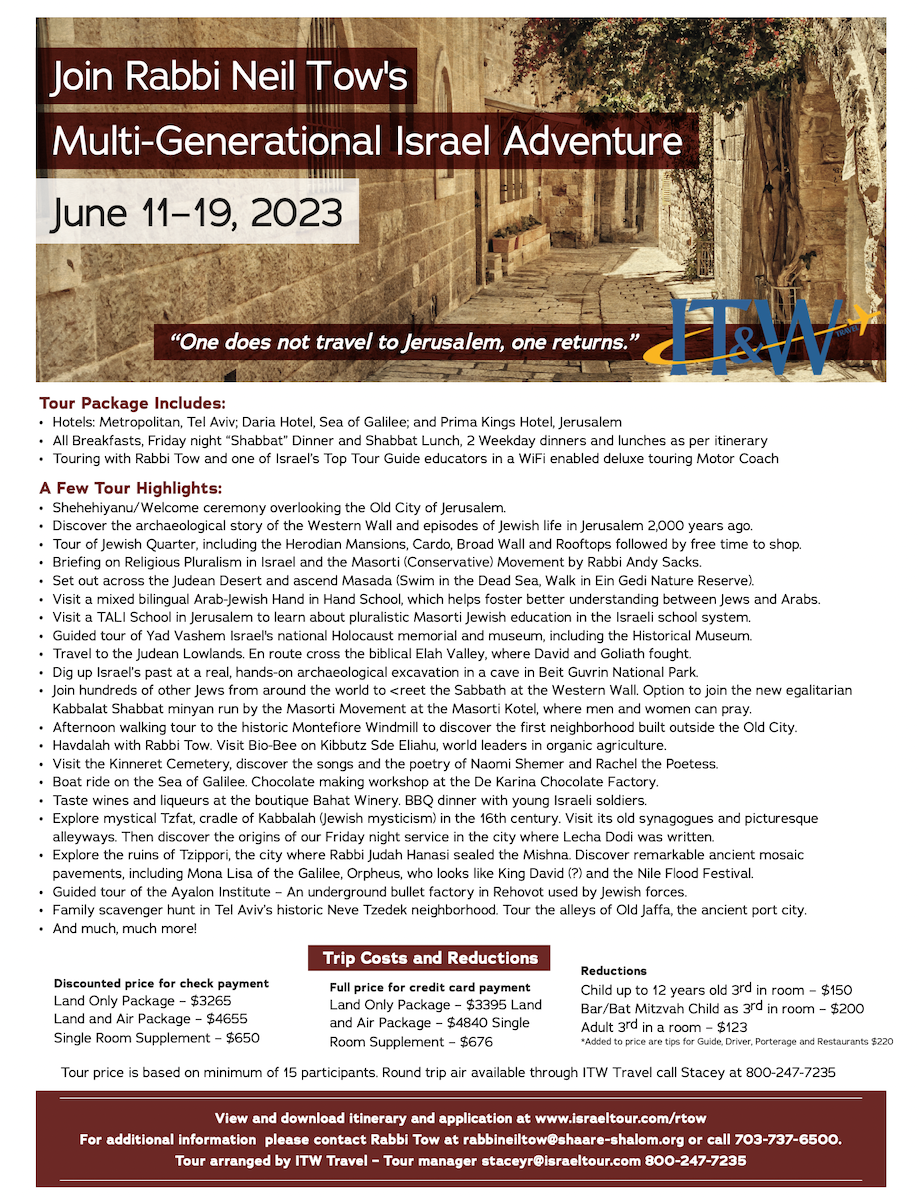 Monday, June 12 – Going up into the Land

Check–in to the Maagan Eden Hotel or Daria Resort by the Sea of Galilee.

Tour the Golan Heights for a special perspective on Israel’s complex geopolitics as we visit bunkers where the Syrian
army literally looked down at Israel. Then we’ll look out over the Syrian border from strategic Mt. Bental.

Please choose one of the following two “touring and tasting” options. Both located on nearby Kibbutz Ein Zivan (Possibility of splitting the group):

Chocolate making workshop at the De

OR: Guided tour of the boutique Bahat

the Germachin Center in Beit Shean. Learn about this community’s modern day Exodus story and the challenges facing the Ethiopian Israeli community today.

Continue south through the Jordan Valley and ascend to Jerusalem.

Check-in to the Prima Kings in Jerusalem. • Free evening

Briefing on Religious Pluralism in

Israel and the Masorti (Conservative) Movement by Rabbi Andy Sacks, Deputy Director of the Masorti Movement.

Discover the archaeological story of the Western Wall and episodes of Jewish life in Jerusalem 2,000 years ago at Robinson’s Arch and the Southern Wall Excavations.

Explore the City of David using the Bible and archaeology to make Jerusalem’s stones tell the story of the city’s ancient past. Wade through Hezekiah’s Tunnel –
A still flowing ancient water system that saved the city of Jerusalem 2,700 years ago (dry option available).

Walk through the Western Wall Tunnels to discover underground Jerusalem.

Tour of Jewish Quarter including the

Herodian Mansions, Cardo, Broad Wall and Rooftops followed by free time to shop and explore on own.

Free time to relax and prepare for Shabbat.

(begins at 5:00pm, so it is also possible to continue to one of the other kabbalat options listed below).

OR: Join hundreds of other Jews from around the world to Greet the Sabbath at the Western Wall. Option to pray together as a congregation at the “Masorti Kotel”, where men and women can stand together. OR: Attend Friday night services at a local Jerusalem synagogue. Festive Shabbat Dinner at hotel

Saturday, June 17 – And on the Seventh Day…in Jerusalem

Montefiore Windmill to discover the first neighbourhood built outside the walls of the Old City. Then continue to nearby Ketef Hinnom, a First Temple period burial site where archaeologists discovered the oldest biblical text ever found.

Set out across the Judean Desert and

ascend Masada by cable car to tour the ruins of Herod’s palace and the last outpost of Jewish independence. Discussion: Which Jewish Legacy – Masada or Yavne? Which decision did our ancesters make?

Swim in the Dead Sea, the lowest place on earth, at a local resort. The resort also has a fresh water pool and spa facilities. Massage and spa treatments available by prior reservation at own expense.

Reserve opportunity to bathe in waterfalls and hear how David hid there from King Saul.

Stop off at “Abraham’s Tent” for a Camel ride and biblical farewell dinner before transfer to airport.

*Added to price are tips for Guide, Driver, Porterage and Restaurants $220