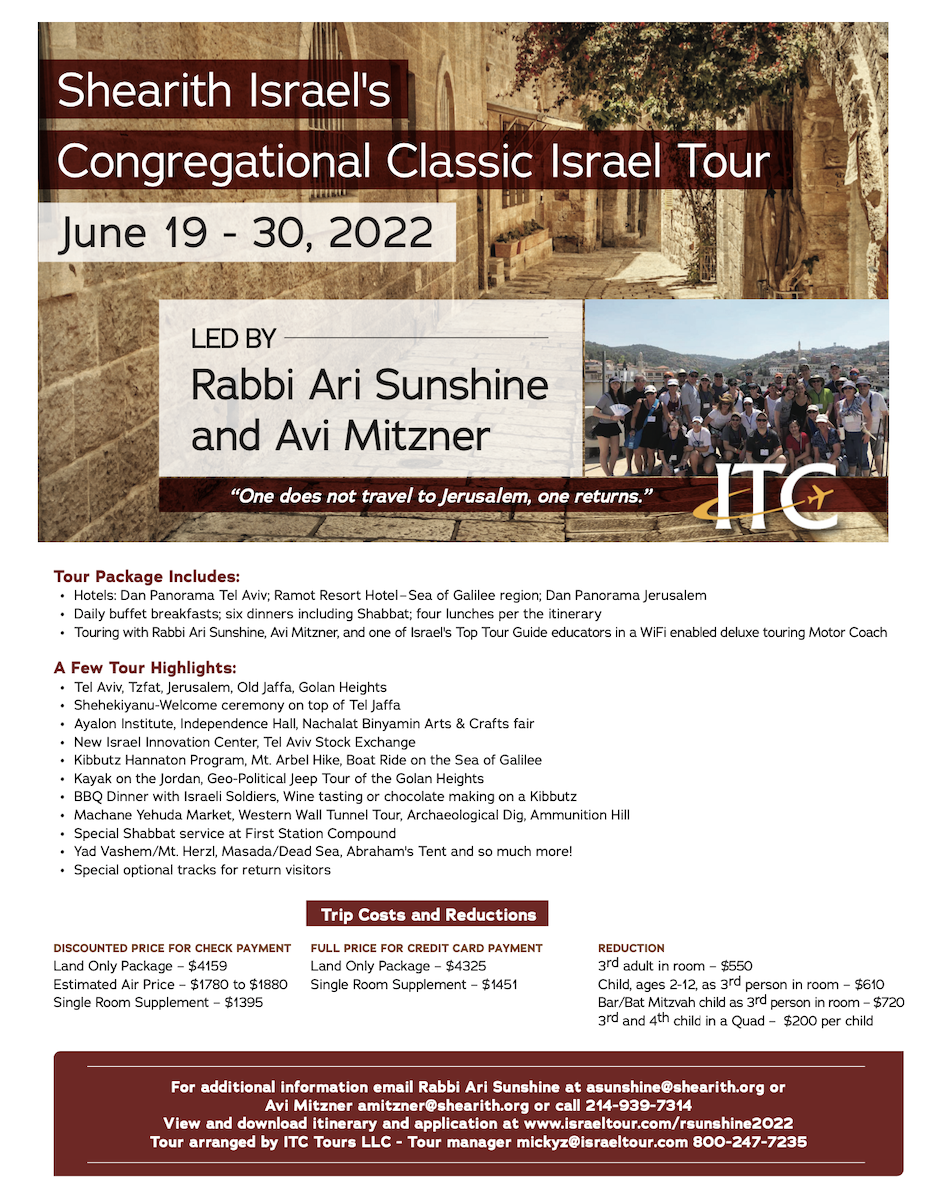 Monday, June 20 – Going up into the Land

Arrive in Israel to be met and assisted by your ITC representative (today’s program depends on arrival time) • Tour the alleys of Old Jaffa, the ancient port city once known as the Gate of
Zion • Shehehiyanu-Welcome ceremony on top of Tel Jaffa overlooking modern Tel Aviv • Lunch on own • Visit to Save A Child’s Heart in Holon to see how this unique project is saving the lives of children from developing countries who come to Israel for medical care • Check-in to the Dan Panorama Hotel on Tel Aviv’s Mediterranean Coast • Welcome dinner and orientation at Goshen Restaurant

Tuesday, June 21 – The Hebrew City and the Jewish State

Hear about the establishment of Tel Aviv at
the Founders’ Monument then stroll down Rothschild Boulevard to view the Bauhaus architecture for which central Tel Aviv was declared a UNESCO World Heritage Site • Visit the new Israel Innovation Center, in the Tel Aviv Stock Exchange, to learn though its interactive exhibit about new advancements by Israeli Start-Ups  in fields such as science, technology, medicine, security, aero-space and more • Lunch on your own and free time to explore the Nachalat Binyamin crafts fair. While there checkout the nearby Carmel Market and bohemian Sheinkin Street – All Three of these Tel Aviv icons meet at the “Magen David Junction” • Guided tour of Ayalon Institute in Rehovot – an underground bullet factory used by Jewish forces before the founding of the State of Israel.

Wednesday, June 22 – Cradles of Jewish Civilization in the Galilee

Depart for northern Israel • Program on Arab- Jewish relations and the complex identity of Israeli Arabs at Givat Haviva, including a visit to a nearby Arab village • Lunch and tour of Kibbutz Hanaton, Israel’s only Masorati kibbutz •

Explore mystical Tzfat, cradle of Kabbalah
(Jewish mysticism) in the 16th century. Visit its old synagogues and picturesque alleyways. Then discover the origins of our Friday night service in the city where Lecha Dodi was written • Boat ride on the Sea of Galilee, followed by a lakeside dinner at Decks Restaurant • Check–in to the Ramot Resort Hotel by the Sea of Galilee
Overnight: Ramon Resort Hotel, Sea of Galilee region

Walk in the lush Tel Dan Nature Reserve, one of the sources of the Jordan River, where you’ll discover biblical intrigue and one of the oldest arches in the world • Lunch on own • Jeep tour to the Golan Heights for a perspective on Israel’s complex geopolitics as we visit former Syrian bunkers overlooking Israel and strategic Mt. Bental • Geopolitical briefing on top of strategic Mt. Bental by Lt. Col. (res.) Sarit Zehavi on the current situation along the Israeli-Syrian ceasefire lines in the Golan Heights. Lt. Col Zehavi is Director of the Alma Center for Research and Education. The group can split between parents and children for the following two tasting activities located next to each other on Kibbutz Ein Zivan. Chocolate making workshop at the De Karina Chocolate Factory • Tour and tasting at the boutique Pelter Winery on nearby Kibbutz Ein Zivan • Dinner with young Israeli soldiers, who are giving some of their best years to the defense of Israel – Meet the Israeli army’s human side Overnight: Ramot Resort Hotel, Sea of Galilee region

Discover Ethiopian Jewish culture at the Germachin Center in Beit Shean • Continue south through the Jordan Valley and ascend to Jerusalem • Shehehiyanu/Welcome ceremony overlooking the Old City of Jerusalem • Lunch on own in the bustling Machane Yehuda Market, take in a slice of Jerusalemites preparing for Shabbat, and pick up supplies for our group Seudah Shlishit picnic on Saturday afternoon. Along the way see the picturesque Nahalaot neighborhood • Check into the Dan Panorama in Jerusalem • Free time to relax and prepare for Shabbat • Friday evening/Kabbalat Shabbat Attend the “Israeli Kabbalat Shabbat” service at the First Station Compound (begins at 5:00pm) • Festive Shabbat Dinner at hotel Overnight: Dan Panorama, Jerusalem

Saturday, June 25 – And on the Seventh Day…. in Jerusalem

Briefing on Religious Pluralism in Israel and the Masorti (Conservative) Movement by Rabbi Andy Sacks, Deputy Director of the Masorti Movement • Discover the archaeological story of the Western Wall and episodes of Jewish life in Jerusalem 2,000 years ago at Robinson’s Arch and the Southern Wall Excavations • Walk through the Western Wall Tunnels to discover underground Jerusalem • Lunch on own • Tour of Jewish Quarter including the Herodian Mansions, Cardo, Broad Wall and Rooftops followed by free time to shop and explore on own.

2nd Timers Option: Synagogues of the Jewish Quarter
Tour includes visits to the Four Sephardic Synagogues, the restored Hurva Synagogue, the Karaite Museum. Then hear about the remarkable discoveries under the ruins of the Tiferet Yisrael Synagogue.

Update on Israeli and Middle East politics by Steve Linde, editor-in-chief of the Jerusalem Report and former editor of the Jerusalem Post • Guided tour of Yad Vashem Israel’s national Holocaust memorial and museum, including the Historical Museum and Children’s Memorial.

Guided tour of Yad Vashem Campus focusing on Holocaust art. This track will examine both art created to memorialize different aspects of the Holocaust and art produced during the holocaust by its victims, including visits to the Museum of Holocaust Art, the Yad Vashem Synagogue and viewing sculpture installed at Yad Vashem.

Lunch on own • Meaningful visit to the Mt. Herzl Cemetery to discover chapters in the history of Israel at the graves of Yitzhak Rabin, Golda Meir, Theodore Herzl and Hannah Senesch • Engage  in hands-on tzedakah at Pantry Packers or Yad Ezra Veshulamith preparing food packages for distribution to some of Israel’s neediest people • Free evening • Dinner on own Overnight: Dan Panorama Hotel, Jerusalem

Set out across the Judean Desert and ascend Masada by cable car to tour the ruins of Herod’s palace and the last outpost of Jewish independence. Discussion: Which Jewish Legacy – Masada or Yavne?

Which decision did our ancesters make?

2nd Timers Options: Ancient Jewish Communities of the Dead Sea Coast
Tour the ruins of Qumran, where the Dead Sea Scrolls were found • Visit the ancient synagogue of Ein Gedi

Swim in the Dead Sea, the lowest place on earth, at a local resort. The resort also has a fresh water pool and spa facilities. Massage and spa treatments available at own expense • Lunch at Dead Sea resort • Time permitting: Walk in Ein Gedi Nature Reserve opportunity to bathe in waterfalls and hear how David hid there from King Saul • Stop off at “Abraham’s Tent” for a Camel ride and biblical dinner before returning to Jerusalem
Overnight: Dan Panorama, Jerusalem

Visit Yad Lakashish, a unique employment project helping Jerusalem’s elderly, including a stop in its shop “where shopping is a mitzvah!” • Multimedia tour of the new Six Day War Heritage Museum at Ammunition Hill, the site of the fiercest battle in the Six Day War • Lunch on own • Visit the Israel Museum to see the Dead Sea Scrolls and the Model of ancient Jerusalem in the first century. You are welcome to stay at the musuem to explore additional exhibits on own. The museum has several eateries. Recommendations: Modern Israeli art, Synagogue interiors in the Judaica Section and the Archaeology Wing • Remainder of afternoon free to explore on own and get in last minute shopping • Late check out • Farewell Dinner at Medita Restaurant • Transfer to Ben Gurion Airport See you again soon!

Land Only Package $4159 (Discounted rate for payment by check)