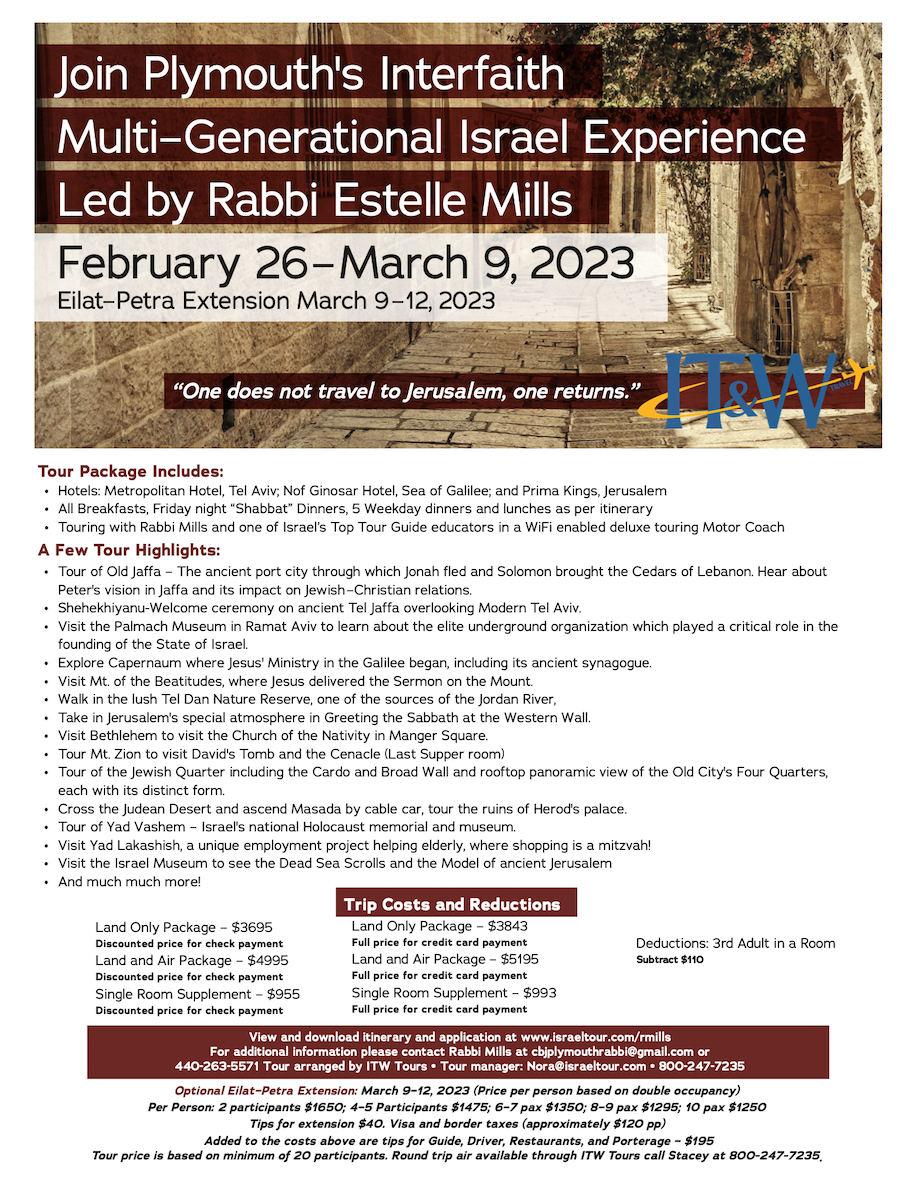 Morning arrival in Israel to be met and assisted by your ITWT representative (today’s program depends on arrival time).Tour of Old Jaffa – The ancient port city once known as Zion Gate, through which Jonah fled and Solomon brought the Cedars of Lebanon. Hear about Peter’s vision in Jaffa and its impact on Jewish – Christian relations. See Ramses Gate and the Statue of Faith on top of ancient Tel Jaffa. Shehekhiyanu–Welcome ceremony on ancient Tel Jaffa overlooking Modern Tel Aviv.

Check in to the Metropolitan Hotel in Tel Aviv.

Tuesday, February 28 – The Hebrew City and the Jewish State

ITC Touch: Discover City of Sand and Sea, a mosaic fountain created by artist and writer Nachum Gutman, portraying scenes from the history of Jaffa and Tel Aviv.

Hear about the establishment of Tel Aviv at the Founders’ Monument. Then stroll down Rothschild Boulevard to view the Bauhaus architecture for which central Tel Aviv was declared a UNESCO World Heritage Site.

Lunch on your own and free time to explore the Nachalat Binyamin crafts fair. While there, check out the nearby

Carmel Market and great street food. Then have a look at bohemian Sheinkin Street – All Three of these

Tel Aviv icons meet at the “Magen David Junction”. Visit the Palmach Museum in
Ramat Aviv to learn about the elite underground organization which played a critical role in the founding of the State of Israel.

Wednesday, March 1 – Encounters with the Roman World and Mystical Tzfat

Tour the Roman ruins of Caesarea, where Peter accepted Cornelius as the “first gentile adherent to Christianity”. Explore its Roman Theater, Amphitheater, Hippodrome and Promontory Palace. Then ponder a rabbinic debate over Jews attending gladiator games.

Tour mystical Tzfat’s old synagogues and picturesque alleyways. Tzfat
was the cradle of Kabbalah (Jewish mysticism) in the 16th century. Kabbalat Shabbat, Judaism’s Friday night service and the hymn Lecha Dodi originated in Tzfat a that time. Check in to Nof Ginosar Hotel on Kibbutz Ginosar by the Sea of Galilee Dinner at hotel.

Thursday, March 2 – Sea of Galilee, Sources of the Jordan and the Strategic Golan Heights

Explore Capernaum where Jesus’ Ministry in the Galilee began, including in its ancient synagogue.

Visit Mt. of the Beatitudes, where Jesus delivered the Sermon on the Mount.

Walk in the lush Tel Dan Nature Reserve, one of the sources of the Jordan River, where you’ll discover biblical intrigue and one of the oldest arches in the world.

Ascend to Golan Heights and lookout  over pre 1967 Israel as Syrian soldiers once did. Then continue to Mt. Bental to look over Israel’s current border with Syria and appreciate the region’s strategic significance.

Friday, March 3 – Through the Jordan Valley to Jerusalem

See the well-preserved wreck of an ancient fishing boat (‘the Jesus boat’) discovered in the Sea of Galilee near Ginosar at the Yigal Alon Museum.

Boat ride on the Sea of Galilee.

Drive south through Jordan Valley Visit Qasr El Yahud – The Jordan River Baptismal site, traditionally associated with where the Children of Israel crossed the Jordan and Elijah ascended to heaven in a Chariot of Fire. Look out the Old City and Temple Mount and City of David.

Time permitting: Explore the bustling Machane Yehuda Market and take in a slice of local life as you see Jerusalemites prepare for the Sabbath.

Check in to Prima Kings Hotel or Prima Royal Hotel in Jerusalem.

Take in Jerusalem’s special atmosphere by joining worshipers Greeting the Sabbath at the Western Wall. Option to pray together in the egalitarian section, where men and women can stand together.

OR: Enjoy leisure time and relax before dinner.

Saturday, March 4 – And on the Seventh Day….in Jerusalem

OR: Visit the First Temple Period burial site at Ketef Hinnom, where archaeologists discovered the oldest biblical text ever found.

Travel to Bethlehem to visit the Church of the Nativity in Manger Square.

Tour Mt. Zion to visit David’s Tomb and the Cenacle (Last Supper room) – All under the same roof, crowned with a Minaret.

Free evening. Dinner on own.

Recommendation for the evening:

Visit the Western Wall and then discover its archaeological story and episodes of Jewish life 2,000 years ago at Robinson’s Arch and the Southern Wall Excavations.

Walk through the Western Wall Tunnels to experience underground Jerusalem.
Follow the Via Dolorosa to the Church of the Holy Sepulchre, the site of the Crucifixion and burial of Jesus.

Tour of the Jewish Quarter including the Cardo and Broad Wall and rooftop panoramic view of Old City’s Four Quarters, each with its distinct form. Free evening. Dinner on own. Overnight: Prima Kings Hotel or Prima Royal Hotel, Jerusalem

Monday, March 6 – Into the Desert: Masada and the Dead Sea

Set out across the Judean Desert on the Good Samaritan Route. Then travel along the Dead Sea Coast passing Qumran, where the Dead Sea Scrolls were discovered.

Ascend Masada by cable car to tour the ruins of Herod’s palace and last outpost of Jewish independence 2,000 years ago.

Swim in the Dead Sea, the lowest  place on earth, at a local resort. The resort also has a fresh water pool and spa facilities. Massage and spa treatments available by prior reservation at own expense.

Dinner on own. Free evening.

Meaningful visit to the Mt. Herzl Cemetery to discover chapters in the history of Israel at the graves of Yitzhak Rabin, Golda Meir, Theodore Herzl and Hannah Senesh.

Dinner on own. Free evening.

Visit Yad Lakashish, a unique employment project helping Jerusalem’s elderly, including a stop in its shop “where shopping is a mitzvah!” Visit the Israel Museum to see the Dead Sea Scrolls and the Model of ancient Jerusalem in the first century. Free time to explore additional exhibits on own. Recommendations: Modern Israeli art, Synagogue interiors in the Judaica Section and the  Archaeology Wing.

Remainder of afternoon free to explore on own and get in last minute shopping.
Farewell dinner at Medita Restaurant.

Descend into a Red Sea coral reef at Eilat’s Underwater Observatory where you look out the window at the surrounding marine life. Continue exploring Eilat’s remarkable undersea world at the observatory’s aquarium.

Check-in to Isrotel Ganim Hotel or similar in Eilat.

Friday, March 10 – The Wonders of Petra

Early departure for Petra to explore the amazing red sandstone structures carved by the ancient Nabateans. Enter Jordan at the Arava Crossing and travel to Petra by bus (approx. 2.5 hours). Tour its Treasury (“Khaznieh”), Roman theatre, impressive caves and rock formations of this Nabatean City.

Red Sea Sail – Board a touring yacht at the Eilat marina for a leisurely cruise and lunch on the Red Sea. Snorkeling equipment is available for a closer look with the most exquisite coral reefs and tropical fish to be found in the world.

$3695 Land Only Package (Discounted rate for payment by check)

Added to the costs above are tips for Guide, Driver, Restaurants and Porterage $195 (pre-collected).