This Israel tour will cover Israel‛s many wonders of Tel Aviv, the Mediterranean Coast, Mystical City of Tzfat, Masada, the Dead Sea and Jerusalem

This Israel tour will cover Israel‛s many wonders of Tel Aviv, the Mediterranean Coast, Mystical City of Tzfat, Masada, the Dead Sea and Jerusalem 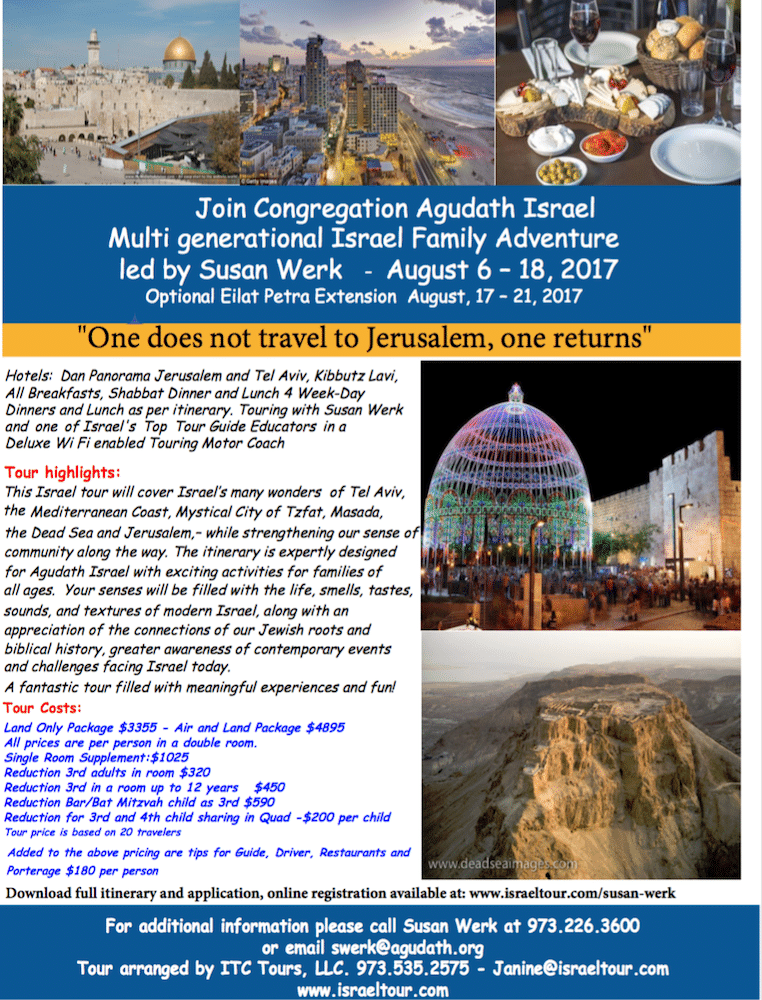 Depart USA on an overnight flight to Israel

Going up into the Land

Arrive in Israel to be met and assisted by your ITC representative. Tour the alleys of Old Jaffa, the ancient port city once known as the Gate of Zion. Shekhiyanu-Welcome ceremony on top of Tel Jaffa overlooking modern Tel Aviv. Proceed to check-in at the Dan Panorama Hotel on Tel Aviv’s Mediterranean Coast. Welcome dinner and orientation at Maganda Yemenite Restuarant. Overnight: Dan Panorama Hotel, Tel Aviv
3

The Hebrew City and the Jewish State

Walking tour of historic “Little Tel Aviv” – Discover the quaint Neve Tzeddek neighbourhood that gave birth to the “first Hebrew city in 2,000 years”. Relive David Ben Gurion declaring the new State of Israel at Independence Hall. Stroll down Rothschild Boulevard to view the Bauhaus architecture for which central Tel Aviv was declared a UNESCO World Heritage Site. Lunch on your own and free time to explore the Nahalat Binyamin crafts fair. Travel to Rehovot for a guided tour of the Ayalon Institute – an underground bullet factory used by Jewish forces before the founding of the State of Israel. Free time to swim in the Mediterranean Sea and enjoy beach side Promenade. Free evening. Dinner on own. Overnight: Dan Panorama Hotel, Tel Aviv
4

Cradles of Jewish Civilization in the Galilee

Depart for northern Israel. Explore ancient Tzippori and study Jewish texts in the ruins of the city where Rabbi Judah Hanasi sealed the Mishna. Discover its magnificent mosaics, including Mona Lisa of the Galilee and ponder why an ancient synagogue floor features a wheel of the zodiac. Lunch on own. Tour the old synagogues and picturesque alleyways of the mystical city of Tzfat and discover the origins of our Friday night service where Lecha Dodi was written. Visit the studio of a Kabbalistic artist and hear how Jewish spirituality influences his work. Check–in to Kibbutz Lavi Hotel in the Galilee. Dinner and overnight: Kibbutz Lavi.
5

Walk in the lush Tel Dan Nature Reserve, one of the sources of the Jordan River, where you’ll discover biblical intrigue and one of the oldest arches in the world. Lunch on own. Jeep tour to the Golan Heights for a perspective on Israel’s complex geopolitics as we visit former Syrian bunkers overlooking Israel and strategic Mt. Bental. Please choose one of the following two “touring and tasting” options. Both located on nearby Kibbutz Ein Zivan (Possibility of splitting the group): Chocolate making workshop at the De Karina Chocolate Factory. Barbeque dinner on an Israeli army base with young soldiers who are giving some of the best years of their lives to the defense of Israel. Overnight: Kibbutz Lavi
6

Across Israel: A Multicultural Jewish Society

Discover Ethiopian Jewish culture at the Gemarchin Center in Beit Shean. Lunch at Germarchin Center. Continue south through the Jordan Valley and ascend to Jerusalem. Shekhiyanu/Welcome ceremony overlooking the Old City of Jerusalem. Explore the raucous Machane Yehuda Market and take in a slice of local life as you see Jerusalemites prepare for Shabbat. On the way, see the nearby picturesque Nachalaot neighborhoods. Check-in to Dan Panorama Hotel, Jerusalem. Free time to relax and prepare for Shabbat. Friday/Shabbat evenings options: Join hundreds of other Jews from around the world to Greet the Sabbath at the Western Wall. Option to pray together as a congregation at the “Masorati Kotel”, where men and women can stand together. OR: Attend Friday night services at a local Jerusalem synagogue. Festive Shabbat Dinner at hotel. Overnight: Dan Panorama Hotel, Jerusalem
7

And on the Seventh Day… in Jerusalem

Shabbat morning services at a local Conservative/Masorati synagogue, followed by Kiddush and an update about the Conservative/Masorati movement in Israel. Shabbat Lunch at the Fuchsberg Center for Conservative Judaism. Shabbat afternoon options: Late afternoon walking tour to the historic Montefiore Windmill to discover the first neighbourhood built outside the walls of the Old City. AND/ OR: Walking tour to First Temple period burial site at Ketef Hinnom – Where archaeologists discovered the oldest biblical text ever found. Havdalah together as a community. Free evening. Dinner on own. Recommendation for the evening: Visit the First Station Compound, Jerusalem’s restored Ottoman railway station turned restaurant – cafe area. Overnight: Dan Panorama Hotel, Jerusalem
8

Guided tour of Yad Vashem Israel’s national Holocaust memorial and museum, including the Historical Museum and Children‛s Memorial. (Children under age 10 are not permitted in Yad Vashem’s historical museum). Alternate program for younger children: Visit Jerusalem’s Biblical Zoo, where you’ll see animals which lived in Israel during biblical times. (Children must be accompanied by an adult. Zoo visit). Lunch on own. Meaningful visit to Mt Herzl Cemetery to discover chapters in the history of Israel while vidsiting the graves of Yitzhak Rabin, Golda Meir, Theordore Herzl and Hannah Senesch. Engage in hands on tzedakah preparing food packages for distribution to some of Israel’s neediest people at Pantry Packers in southern Jerusalem. Dinner on own in Jerusalem’s Mamilla Quarter. Watch the Night Spectacular – Sound and light show at the Tower of David. Overnight: Dan Panorama Hotel, Jerusalem
9

The Old City of Jerusalem

An Ancient Jewish Legacy- B’nai Mitzvah Ceremony at the Masorati Kotel to connect a Jewish past with a Jewish future. Discover the archaeological story of the Western Wall and episodes from rabbinic texts while standing where Jewish pilgrims walked 2,000 years ago at Robinson’s Arch and the Southern Wall Excavations. Discover underground Jerusalem in the Western Wall Tunnels. Festive B’nai Mitzvah lunch at Between the Arches restaurant. Explore the City of David using the Bible and archaeology to make Jerusalem’s stones tell the story of the city’s ancient past. Wade through Hezekiah’s Tunnel – A still flowing ancient water system that saved the city of Jerusalem 2,700 years ago (dry option available). Free evening. Dinner on own. Overnight: Dan Panorama Hotel, Jerusalem
10

Masada and the Dead Sea: Freedom Fighters or Fanatics?

Set out across the Judean Desert and ascend Masada by cable car to tour the ruins of Herod’s palace and the last outpost of Jewish independence. Discussion: Which Jewish Legacy – Masada or Yavne? (Option of climbing Masada to be determined closer to the actual date and may require additional transportation fee). Swim in the Dead Sea, the lowest place on earth, at a local resort. The resort also has a fresh water pool and spa facilities. Massage and spa treatments available by prior reservation at own expense. Lunch at Dead Sea resort. Time permitting: Walk in Ein Gedi Nature Reserve opportunity to bath in waterfalls and hear how David hid there from King Saul. Stop off at “Abraham’s Tent” for a Camel ride and a light biblical dinner before returning to Jerusalem. Free evening. Overnight: Dan Panorama Hotel, Jerusalem
11

Digging Up the Past and Meeting Modern Pioneers

Engage in a real hands on archaeological work unearthing Israel’s past at Dig for A Day in Beit Guvrin National Park. Lunch on own Travel to the western Negev. Meaningful encounter with Israeli peers at Kibbutz Erez, one of Metrowest Federation’s Partnership communities in the Merhavim Region. (Program to be determined together with P2K staff). Tour of an exotic orchard, followed by a gourmet Yemenite dinner at Ora‛s Yard on Moshav Kfar Maimon. Taste their home-made liqueurs and jams. Hear your hosts’ moving immigration stories. Dinner: Ora’s Yard. Return to Jerusalem. Overnight: Dan Panorama Hotel, Jerusalem
12

Modern Israel’s Realities and Wrapping Up

Visit Yad Lakashish – A unique employment and Tzedakah project serving Jerusalem’s elderly citizens and stop off its store where shopping is a mitzvah. Plant a tree in the soil of the land of Israel to help renew a forest near Jerusalem. Lunch on own. Guided tour of Jewish Quarter including the Cardo, Broad Wall and Rooftops followed by free time to shop and explore on own. Remainder of afternoon free to explore on your, relax and get in last minute shopping. Farewell Dinner at Olive and Fish Restaurant Transfer to Ben Gurion Airport – See you again soon!
13

Begin planning your next Israel trip with Susan Werk and ITC Tours!