In the Land of the Book – Tour of the Holy Land

Arrive at Ben Gurion Airport to be met by our Israeli guide, who will accompany us during our entire stay in Israel. (Today’s program depends on arrival time). Travel to Old Jaffa, once the gateway to the land of Israel. Walk through the port from which Jonah the Prophet tried to escape the Lord’s command and stand at the site which commemorates Peter’s Vision on the roof of Simon the Tanner (Acts 10) and changed the face Christendom. 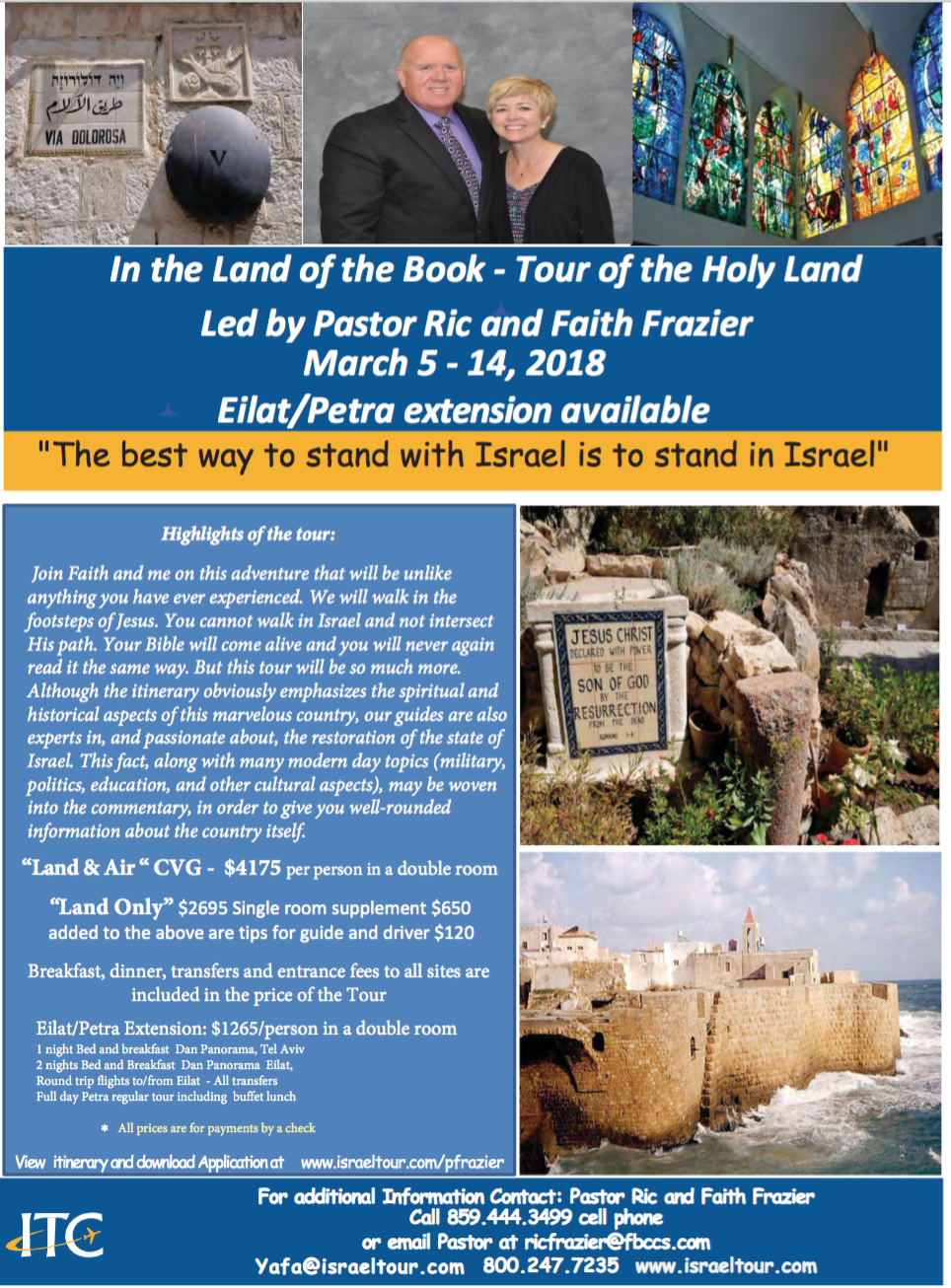 Depart USA on on an overnight flight tofor Israel
2

Ben Gurion Airport / Jaffa / Jerusalem Arrive at Ben Gurion Airport to be met by our Israeli guide, who will accompany us during our entire stay in Israel. (Today’s program depends on arrival time). Travel to Old Jaffa, once the gateway to the land of Israel. Walk through the port from which Jonah the Prophet tried to escape the Lord’s command and stand at the site which commemorates Peter's Vision on the roof of Simon the Tanner (Acts 10) and changed the face Christendom. We then proceed to Jerusalem to check into our hotel. The time is right for a personal devotional - A time of prayer of thanks for safety and the special blessings ahead, a prayer for the people of this land, and a good night’s rest! Festive welcome dinner at hotel. Orientation and overnight: Dan Panorama Hotel, Jerusalem
3

Jerusalem: The Old City After breakfast head to Mount Scopus and travel along its ridgeline to the Mount of Olives for a magnificent panoramic view of the Old City and Temple Mount. Then we will visit the Garden of Gethsemane at its base. From there we will head to the Old Holy City of Jerusalem. We will visit the Tomb of King David and the Cenacle (Room of the Last Supper) on Mt. Zion. Upon entering the walled city through the Zion Gate, you'll walk through the newly restored Jewish Quarter and visit the Roman Cardo, the Herodian Quarter and continue to the Western Wall. Your walk continues along the Via Dolorosa to the Church of the Holy Sepulcher, Overnight and dinner: Dan Panorama Hotel, Jerusalem
4

Jerusalem: The New City First you'll drive to the Hadassah Medical Center to see the Chagall Stained Glass Windows. Next you'll continue to Yad Vashem, the memorial to the Holocaust. At the Israel Museum you'll visit the Shrine of the Book where the Dead Sea Scrolls are displayed and see a large scale Model of Jerusalem as it was during the late Second Temple period. From the Museum we will also see the Knesset, Israel's Parliament and the Givat Ram Campus of the Hebrew University. Then it's back to your hotel in Jerusalem. Next you'll continue to Bethlehem*, stopping at Rachel's Tomb and a visit to the Church of the Nativity. The day ends back in your hotel in Jerusalem. Overnight and dinner: Dan Panorama Hotel, Jerusalem
5

Qumran / Masada / Dead Sea Today, your day begins with a drive across the Judean Desert to the Dead Sea, the lowest point on earth at almost 1300 feet (400 meters) below sea level. You'll stop at Qumran to visit the site where the Dead Sea Scrolls were found and then continue your drive along the shores of the Dead Sea to Masada. You'll ascend the mountain by cable car for a tour of the ancient fortress where the Zealots made their last stand against the Romans before committing mass suicide in 73 AD. When finished, you'll descend by cable car and time permitting; you may have an opportunity to float on the Dead Sea. Overnight and dinner: Dan Panorama Hotel, Jerusalem
6

At leisure We begin this day with a visit to Gordon's Calvary and the Garden Tomb, an alternate site for the Crucifixion and burial of Jesus, discovered in the late 19th century by British General Charles Gordon. Spend the rest of the day walking around the Old City of Jerusalem, enjoying its sights, sounds and the beauty. Overnight and dinner: Dan Panorama Hotel, Jerusalem
7

Caesarea / Druze villages/ This morning you'll leave Jerusalem and drive along the coastal plain to Caesarea, the capital of Judea under the Romans. Here you'll see the excavations of the Crusader city and the Roman port, aqueduct and the amphitheater that has been restored to its former glory as a concert venue. Your journey continues via the Druze villages to Haifa and the summit of Mount Carmel where you will take in a breathtaking panoramic view of the Haifa Bay and Western Galilee. Next, you'll continue on to see the golden domed Baha'i Shrine and visit the upper tiers of the exotic Bahai Gardens. Overnight and dinner: Dan Panorama Hotel, Haifa
8

Haifa / Safed / Golan Heights Your first stop will be Nazareth, where you will visit the Church of the Annunciation. After that you'll head to Safed, the center of Jewish mysticism, where you will visit the ancient synagogues and the artists' colony. You'll continue to the Golan Heights to see the former Syrian bunkers, Kuneitra and the new Israeli town of Katzrin. You'll spend the night in a Kibbutz in the Galilee. Overnight and dinner: Lavi Hotel, Kibbutz Lavi, Galilee
9

Sea of Galilee / Nazareth Today, you'll start the day with a visit of Tiberias, followed by a boat ride on the Sea of Galilee. Then head on to Capernaum to see the ruins of the synagogue and octagonal church of St. Peter. Visit the Yardenit Baptismal Site on the shores of the Jordan River. Next drive pass Beit Shean to Beit Alpha to see the remains of the mosaic floor of an ancient synagogue depicting the zodiac. After that it's time for a Farewell Dinner at Etzel Haturky Restaurant and transfer back to Ben Gurion airport for your return flight home. Overnight: Flight to USA
10

Home again Arrive home and begin planning your next trip to the Holy Land with Christian Holy Land Tours!