This Israel tour will cover Israel‛s many wonders of Tel Aviv, the Mediterranean Coast, Mystical City of Tzfat, Masada, the Dead Sea and Jerusalem.

This Israel tour will cover Israel‛s many wonders of Tel Aviv, the Mediterranean Coast, Mystical City of Tzfat, Masada, the Dead Sea and Jerusalem. 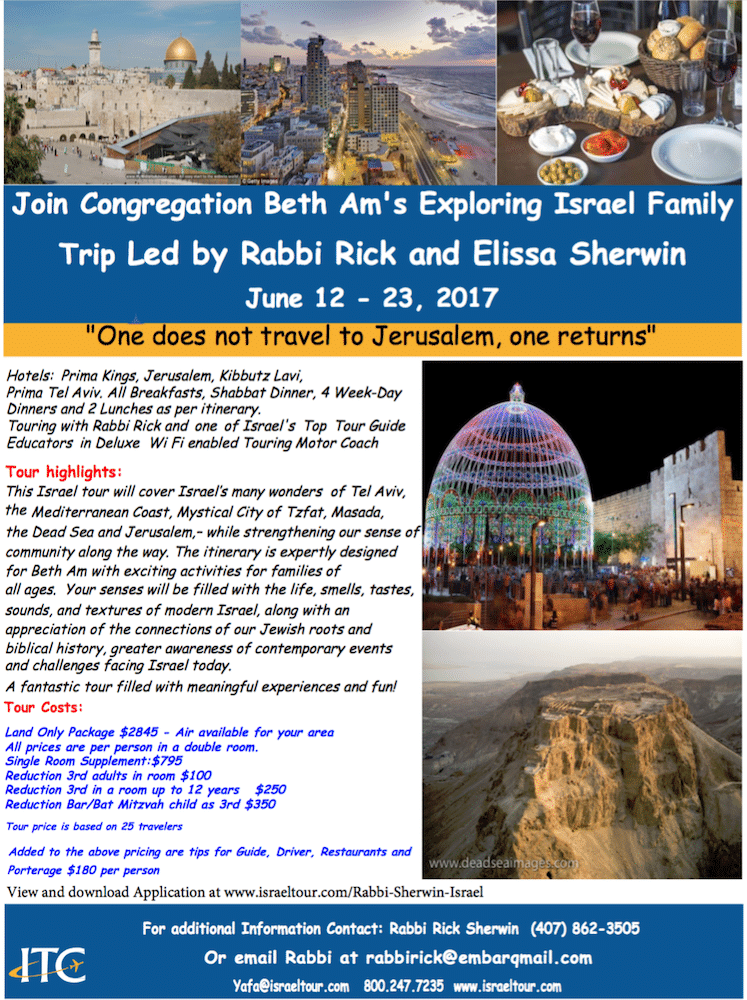 Depart USA on an overnight flight to Israel
2

An Ancient Jewish Legacy B’nai Mitzvah Ceremony at the Masorati Kotel opposite Robinson’s Arch to connect a Jewish past with a Jewish future. Explore the City of David using the Bible and archaeology to make Jerusalem’s stones reveal the story of the city’s ancient past. Wade through Hezekiah’s Tunnel A still flowing ancient water system that saved the city of Jerusalem 2,700 years ago (dry option available). Visit the traditonal prayer area of the Western Wall. Discover underground Jerusalem at the Western Wall Tunnels. Lunch on own. Guided tour of the Knesset to learn about Israel’s democratic system and see the Knesset Menorah decorated with scenes from Jewish history. Renewal of wedding vows in the Mishkenot Sha’ananim neighborhood looking out at the Old City of Jerusalem. Free evening. Dinner on own. Overnight: Prima Kings Hotel, Jerusalem
4

Set out across the Judean Desert and ascend Masada by cable car to tour the ruins of Herod’s palace and the last outpost of Jewish independence 2,000 years ago: Discussion: Which Jewish Legacy – Masada or Yavne? Descend Masada by foot via the Roman Ramp. Camel ride and Bedouin hospitality, including explanation about Bedouin culture at Kfar Hanokdim. Drive to Dead Sea. Lunch at Dead Sea resort. Swim in the Dead Sea, the lowest place on earth, at a local resort. The resort also has a fresh water pool and spa facilities. Massage and spa treatments available by prior reservation and at own expense. Time permitting: Walk in Ein Gedi Nature Reserve opportunity to bath in waterfalls and hear how David hid there from King Saul. Return to Jerusalem. Free evening. Dinner on own. Overnight: Prima Kings Hotel, Jerusalem
5

Tour of Yad Vashem – Israel’s national Holocaust memorial and museum, including the Historical Museum and Children‛s Memorial. Discover the story of Zionism’s founding father Theodore Herzl at the multimedia Herzl Museum. Meaningful visit to the Mt. Herzl Cemetery to discover chapters in the history of Israel at the graves of Yitzhak Rabin, Golda Meir, Theordore Herzl and Hannah Senesch. Explore the raucous Machane Yehuda Market and take in a slice of local life as you watch Jerusalemites prepare for Shabbat. See the picturesque Nachalaot neighborhoods along the way. Lunch on own in market. Free time to relax and prepare for Shabbat. Friday/Shabbat evenings options: Shabbat evening services: To be determined with Rabbi Sherwin. “Shabbat of a Lifetime” – Traditional Shabbat dinner at the home of Jerusalem family. Overnight: Prima Kings Hotel, Jerusalem
6

Saturday, 17 June And on the Seventh Day… in Jerusalem

Visit Yad Lakashish, a unique employment project helping Jerusalem’s elderly, including a stop in its shop “where shopping is a mitzvah!” Drive to Caesarea on Trans Israel Highway – View and discuss Israel’s Security Fence en route. Visit the ruins of Caesarea, including its Roman Theater, Amphitheater, Hippodrome and Promontory Palace. Ponder a rabbinic debate over Jews attending gladiator games. Lunch on own. Tour the old synagogues and picturesque alleys of the mystical city of Tzfat – Cradle of Kaballah (Jewish mysticism) in the 16th century. Discover the origins of our Friday night service where Lecha Dodi was written. Visit the studio of a Kabbalistic artist. Check-in to Nof Ginosar Hotel on Kibbutz Ginosar by the Sea of Galilee. Time Permitting: Late afternoon swim in the Sea of Galilee. Dinner at hotel. Overnight: Kibbutz Lavi
8

Walk in the lush Tel Dan Nature Reserve, one of the sources of the Jordan River, where you’ll discover biblical intrigue and one of the oldest arches in the world. Kayak down the Jordan River to cool off in the middle of the day. Lunch on own. Jeep tour in the Golan Heights to visit bunkers from where the Syrian army literally looked down at Israel. Then look out from the peak of strategic Mt. Bental for a special perspective on Israel’s complex geopolitics. Please choose one of the following two “touring and tasting” options. Both located on nearby Kibbutz Ein Zivan (Possibility of splitting the group): Chocolate making workshop at the De Karina Chocolate Factory. OR: Guided tour of the boutique Bahat Winery including wine tasting. Barbeque dinner on an Israeli army base with young soldiers who are giving some of the best years of their lives to the defense of Israel. Overnight: Kibbutz Lavi
9

Plant a tree in the soil of the Land of Israel at the JNF Planting site near Lavi. Drive across the Galilee to the Mediterranean Coast. Explore the Grottos of Rosh Hanikra – One of nature’s sculpture gardens. Visit the Tunisian Synagogue in Acco to see its remarkable mosaic interior. Lunch on own. Guided tour of the former Atlit detention camp where the British held Holocaust refugees, who tried to enter the country “illegally”. Board an “illegal immigration ship” to watch a multimedia presentation about the heroic pre-State immigration. Drive to Tel Aviv. Check-in to the Prima Hotel on Tel Aviv’s Mediterranean Coast. Free evening Dinner on own. Overnight: Prima Hotel, Tel Aviv
10

Engage in hands on archaeological work unearthing Israel’s past at Dig for A Day in Beit Guvrin National Park. Lunch on Restaurant-Café on Moshav Srigim. Hands on decorative arts workshop “Everyone was born an Artist” at Kakadu studio and gallery on Moshav Tzafririm. Drive across the Elah Valley, where David and Goliath fought. Free time for late afternoon swim in Mediterranean Sea. Free evening. Dinner on own. Overnight: Prima Hotel, Tel Aviv
11

Thursday, 22 June The Hebrew City and the Jewish State

Visit the Palmach Museum in Ramat Aviv to learn about the underground organization which played a critical role in founding the State of Israel.  At Independence Hall relive David Ben Gurion declaring the new State of Israel. Travel to Rehovot for a guided tour of the Ayalon Institute – An underground bullet factory used by Jewish forces before the founding of the State of Israel. Visit an Israel hi-tech firm to see and hear about Israel as the “Start-Up Nation”. Late Check out. Walk through the alleys of Old Jaffa, the ancient port city once known as the Gate of Zion. Wrap up our Israel experience on top of ancient Tel Jaffa overlooking modern Tel Aviv. Farewell Dinner at Maganda Yemenite Restaurant. Transfer to Ben Gurion Airport – See you again soon!
12

Begin planning you next trip with Rabbi Rick and ITC Tours